TO THE GUY WHO TURNED ME ON...

To someone I've had mugs of coffee with on countless mornings, bottles of beer with on countless nights, and shared all those stories with in between (and during!) those times spent guzzling caffeine and alcohol:

I dedicate this entry (from the bottom of my tummy)to compulsive eater.

Food courts are a godsend for creatures like me who are too lazy to bring a packed lunch. And by the stampedes heading for the food courts during lunch time, it's safeto presume that there are a lot of lazy creatures such as myself.

Found in certain office buildings and malls, food courts allow customers to conveniently pick the hot (or at least 'warm') meal of their choice from any of the dozen or so establishments.

Now, if only they'd put in better exhaust systems so that we don't end up smelling like a dozen or so kitchens for the rest of the day. 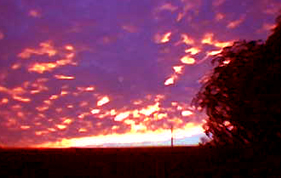 The view from my study window. Took this snapshot a few months ago using my phone.

A few millimeters of rain falls.

The MRT station is overcrowded by a few thousand people more. On the road, vehicles move by only a meter every so often. Either way...

You arrive at the office several minutes late.

Subsequently, you'll get one more memo.

Or your salary will be short by a few hundred pesos on the next payday.