Dread rushed into my brain even before I raised my head from the pillow. Shit. Dread had probably been slithering around the dream that had been forgotten as soon as I woke up.
Friday night had found me unable (well...it was more of unwilling, actually) to complete several requirements for work.
And the specters of ignored Job Orders followed me home.
They whispered in the cab. Wailed in my study. Moaned in the shower. Rattled chains in the silence of my room.
Monday. They were all needed by Monday. Before lunch.
By the glare from the windows, I could tell it was way past nine.
I had overslept.
Specters go poltergeist.
Then.
Salvation.
I realized it was only Sunday.
# posted by vince : 11:19 AM  1 comments

Saw this at Chocwit's LJ. Thought it was fun. Shamelessly did my own. Heheh.

Write 15 statements anonymous to people on your friends list and then pick 5 people to do this as well.

One great proof of my gender's stupidity is that guys aren't fighting over you like they ought to.

Ah. If only I liked your friends...

In case you're wondering: yes, there are moments when I could barely stop myself from begging you to take me back.

Said it before. I'd say it again. Save up.

So I'm not (blank) enough. Or (blank), (blank) and (blank) enough for you. Whatever it is you're looking for, I guess it's not me.

You're One. Bad. Motherfucker. Heheh.

Unfortunately, we crossed paths when I was at a bad place during a bad time.

You have no fucking idea how much you affect me.

You're supposed to be a man. Grow balls.

How can I ever forgive myself for not being there during the times you needed me the most?

I really hoped you were smarter than him.

Had circumstances been different, I'd have my way with you seven ways from Sunday. ^_~
# posted by vince : 9:56 AM  17 comments

Which Trainspotting Character Are You? 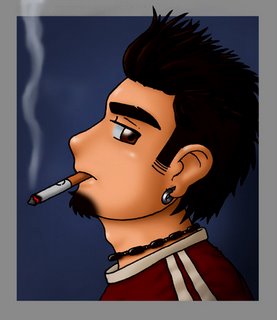 Friday
8:48 a.m.
Somewhere Else
Nothing spectacular happened when the Valkyrie's electrical system failed. No cinematic sparks and explosions. No popping noises. Not even a whiff of burnt plastic smoke. All the lights on the skycar's dashboard simply died 500 meters above Guadalupe Viejo.
My vehicle shuddered in mid-air. And, no longer immune to the laws of gravity, began to plummet.
400 meters.
The 1978 Valkyrie had been the model that elevated Morisato Motors' name among the skycar giants. It had flown out of the Morisato Imasagi plant five years before auxiliary power systems became mandatory for all vehicles that hovered higher than three meters.
I slam my hand on the dash hoping against hope that the lights would all come back on. Nothing.
300 meters.
Perhaps the Valkyrie got its name because some Morisato Motors employee had listened to Wagner at the Imperial Opera House a few decades ago. Or he had the vague idea that a Valkyrie was a kind of flying Norse deity.
Which was accurate. More or less.
Without power, trying to steer the Valkyrie is virtually impossible. I manage to smash a Nissan Strato's tail lights as I try to get the vehicle to hit the Pasig River instead of EDSA.
200 meters.
The smiley guy at the Clear Skies used aircar dealership in Banawe had promised, had sworn even, that I was getting a great deal for such a classic. He even threw in a service warranty. For life.
My nosedive is almost abruptly stopped by a HoverCab that barely manages to swerve away, horns blaring.
100 meters.
So.
If I die in a Valkyrie...would I end up in Valhalla?
# posted by vince : 11:44 AM  3 comments

Take the quiz: "Which Dead Rock Star Are You?"

Kurt Cobain
You are Kurt Cobain! You're grundgy, twisted and very talented. You have a certain charm and individuality that sets you a part from many. You are beautiful! Oh, he died in 1994 from a gun shot wound to the mouth. Suicide.


Found this rockin' quiz thanks to Gabie. Heheh.