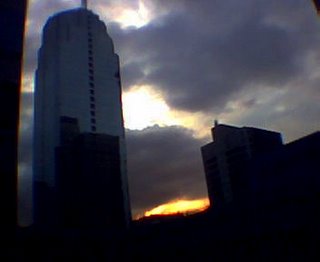 Taken sometime during the first half of December when three or four projects were being rushed for the holidays.

Sneaked off to a neighboring building's outdoor dining area with Kitty for our coffee break that was so late, the other people on the 7th floor were already eating dinner.
# posted by vince : 6:37 PM  0 comments

Once again, thanks to the Christmas rush, getting a cab has become harder than, say, getting a bank loan or a U.S. Visa.
Cab drivers who'd bother to stop (instead of conveniently, numbly staring straight ahead and driving past) would demand to know your destination. "I'm not going there", they would say. Or "Traffic's bad there." And even "That's too far."
Was heading for a party with Eclectic Curiosity one time and a cab driver we hailed stopped, but won't take us to Blue Ridge because he was hungry. As we waited for the next cab that wasn't occupied by people slouched so low the seats looked empty, I idly wondered why he even stopped at all.
I suppose he was expecting us to bring him to the nearest Jollibee for some chicken and extra rice.
Getting around and getting drunk, particularly after work, had to be limited to venues that can be reached by foot.
Yet, a few Fridays ago, I met an exception to the haughty monsters that the usually bearable cab drivers evolve into each and every December.
It was very late at night in Makati. I had been trying to get a cab for over an hour. I had walked from the main roads to the side streets so I can distance myself from everyone else (which was, that night, a lot of people) waiting for a taxi. I was tired and sleepy. My eyes hurt because I had to stare at all those headlights. And my feet hurt after I walked into the very bowels of Legaspi Village.
Tired of being ignored by more than a dozen passengerless taxis, I had decided to give up, light one last stick, and walk back to Ayala where to take a bus.
I saw the cab.
Decided to take a chance. Raised my hand.
Lo and behold - it stopped.
The cab was called Easy Ride.
I figured that was a good little omen, so I risked telling the driver where I lived.
He agreed with a nod.
And the cab ride was wonderful even by the usual, non-December Metro Manila standards.
The car didn't smell of vanilla overdose, damp hospital ward, wet mutt or body odor.
The radio was tuned in to a light rock station, not one of those pop monstrosities with the annoying mascot voices, unfunny jokes and phoney laughter from the disk jockeys every few seconds.
Manong driver didn't try to lecture me on religion, or corruption in government, or the absolute benefits of an FPJ presidency.
Nor did he try to tranform his vehicle into a coffin for two, or least a theme park ride.
It was pleasantly uneventful all the way home.
Yes.
I gave a decent tip.
# posted by vince : 3:13 PM  3 comments 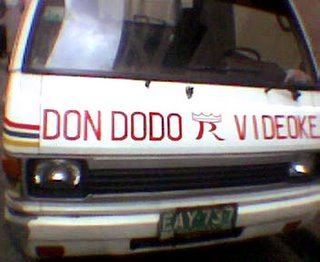 This vehicle was parked at the back of our office building a few days ago.

Do. Isa ngang My Way.