Played around with Neil Gaiman's Magnificent Oracular Journal, which basically plucks out lines from his blog.

After a couple of tries, it came up with this: There may have been more.

I thought it was a pretty interesting line to start a story. So now, I have this little tale:

There may have been more.

Then again, who was I shitting?

According to the most recent government survey, which was dated three years ago, the village of San Esteban was home to four thousand seventy six souls. It was a farming community in the middle of nowhere. With the bad road conditions, it would have taken us five hours to get there. Our mission didn’t give us that much time.

The village’s plaza was the designated landing zone. Even with the helicopter still high above the heart of the village, we could already see the old man sprawled near San Esteban’s sole clinic.

We hurried to where he was as soon as we landed. Apparently, he was a doctor. His coat was torn, grimy and splattered with blood – mostly his, judging by the wounds. Unable to speak because of the bubbling gash on his neck, he begged, with his eyes and a trembling hand, to be shot.

Sarge turned towards the squad’s medic. A silent question that the medic answered simply by shaking his head.

With the helicopter back up in the air, it had been quiet in the plaza.

Yet no dogs barked. Not one panicked bird flew away from the overgrown church belfry, or the nearby trees. There were just mute echoes.

Sarge lowered his pistol and ordered us to proceed.

We scouted the structures around the plaza. Broken down doors. Smashed, shattered windows. Fluorescent lights and electric fans switched on, then abandoned. Mosquito nets put up for the night, torn apart, and now looked like dusty cobwebs in the fading daylight. It was the same everywhere.

The vicinity beyond the plaza was yet unexplored. Stretches of empty streets stared back at us.

But our orders were clear.

Just fifteen minutes to look for survivors of what Sarge simply described as an infestation.

Fifteen minutes and all we found were lots of bloodstains and body parts - even in the police outpost. Now that I think about it, aside from the old doctor, we didn’t see a single intact corpse.

Fifteen minutes and we were heading back for the plaza, firearms raised towards the gaping doorways and windows as the helicopter landed behind us.

Fifteen minutes and San Esteban would be blasted off the face of the earth courtesy of the air force. Hopefully taking whatever infestation with it.

I didn't think it would work.

From the helicopter, I was sure I saw the old doctor scuffling away from the plaza.
# posted by vince : 1:14 PM  2 comments 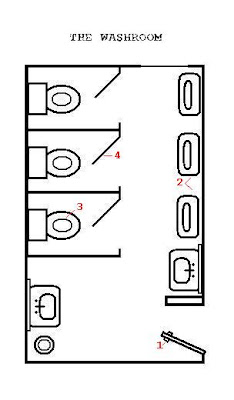 There's something wrong with the door of the office washroom.

Leaving the washroom can be quite tricky at times. More than once, I had to claw at the door's edge like some mutt until I managed to pull back the door.

Since the start of the year, the maintenance guys must have installed five or six brand new knobs. Which would each last three days tops. Desperate for a solution, the building administration had an aluminum handle bolted on the door along with another new knob.

The aluminum bar lasted for five.

Now, I have two questions regarding the matter. Who the fuck can rip out an aluminum handle bar held down by metal screws? And, what can I do to avoid making him (or, possibly, it) angry?


The building recently installed them newfangled waterless urinals (see Fig.2). They even put up a sign that says each urinal saves something like 150,000 liters of fresh water a year.

Which was a nice thought.


We share the washroom with the company located a floor below us. The place gets rather crowded right after lunch breaks. For some reason , a number of their guys don't bother to lock the cubicle doors (see Fig.4) when they piss into the bowls when the urinals are taken. And when they don't lock the cubicle doors, the little sign outside would not flip to the red "occupied" sign.


Every day. Every. Single. Fucking. Day. Someone would be taking a dump in the washroom. Usually in the afternoons. I guess the toilet bowls came with one free shitter so as not to waste the facilities.

Whenever I'd catch the tell-tale whiff on my way in, I'd do a 180 turn and walk the length of the corridor, and up a flight of stairs to the other washroom.

Remember: the knob is usually busted.