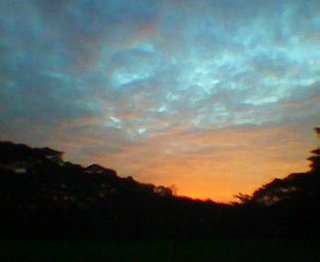 I got to (dusk?)watch this sky with Kitty last Friday.

We were at the UP Lagoon area as we waited for friends (including videoke capo Is It Safe and the long lost Souljacker) who'd be joining us for a simple last minute gathering before the year ended. The sky had been white and gray with faint strips of blue so this was a pleasant surprise. It was as good a sunset as can be expected from an afternoon that was mostly overcast.

And then, a few moments later, it got better. 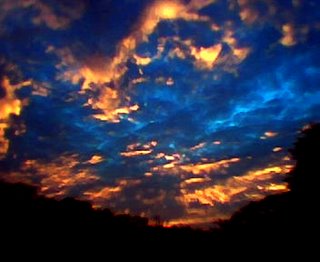 I gazed at this silent eruption. Bathed in cool firelight.

After 2004, I knew the next year would be better. Had to be better.

And it was. It actually turned out great. Not because of lowered expectations, but because '05 simply had exceeded whatever expectations or notions I had in my then long-haired head as I stood on the front porch to watch Metro Manila vanish underneath firework smog a year ago.

2005 had been a time for the closing certain books while beginning new chapters for others. Receiving text messages about deaths and wakes. Getting invitations for weddings and baptisms. Weeding out terrible acquaintances. Cultivating terrific new friendships. Discovering new places. Visiting old haunts.

The light began to fade.

And although it really wasn't the last sunset of 2005, I silently said a fond farewell to the year that was.