When Kitty told me that she'd be leaving for another ad agency, I knew the office would never be the same. Much in the same way, I was pretty sure her new company would never be the same again.
She has enough energy, and joy, and MP3 selections (and, after one too many Cokes past 4 p.m., more energy) that, like a little power plant, she can brighten up any room.

With her leaving, I knew the lights would be just a little dimmer.

That said, I do wish her all the best. She has the potential to make a difference. The new environment may just be the place for her to spread her wings further, and fly higher.

I'd like to think that long before the last time she passed through our company's doors as an employee, she had, in her own way, raised the bar. 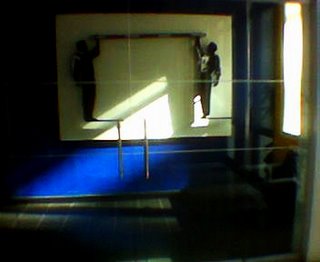 Took this pic one of those mornings after Kitty announced her resignation, yet I managed to post it just now.