I was so amused by this quiz... 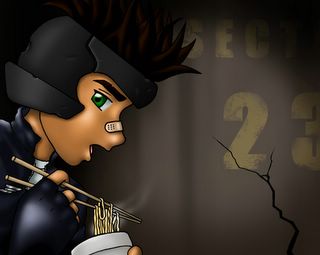 Just made myself hungry. Gah.

Get Your Own Addicted Meme Here

More cool things for your blog at
Blogthings


I'm actually guilty of thinking about Bilbo's analogy while buttering my toast one morning. And a shadow and a threat is actually growing in my mind.

At the parked van where meals are sold. Tapa. Fried bangus. Porkchop. Laing. Sinigang. Pipino sandwiches pretending to be cheeseburgers. Double orders of rice the norm rather than the exception. That sort of van.

A lanky man goes up to the counter and picks Mechado in one of the small, tightly-knotted plastic bags.

He goes through five more bags, repeating the ritual. I suppose he actually was capable of smelling food through plastic, for he was able to select a particular bag.

When he leaves, I choose one of the Mechado bags that he hadn't picked up and held close to his nose.
# posted by vince : 8:52 AM  0 comments

Which Member of the Endless Are You?

Is this why I've been so sleepy the past few days?

Golden glitter had been smeared on the Makati Avenue pavement.

It could have come from a fallen Christmas decoration thingie.

Or maybe some guy who had been in a long coma ('coz of a breakdancing accident) woke up thinking it was still sometime before 1990, generously applied glitter and gel into his hair, and had been walking to find a hip disco like Mars or Euphoria, but tripped, fell and hit his head on the concrete, and slipped into a coma once more.

HERE'S LOOKING AT YOU, KID.

Saw this quiz in Chockwit's LJ. Decided to take it as well (um...slow day at work). And the result was:

"You must remember this, a kiss is still a
kiss". Your romance is Casablanca. A
classic story of love in trying times, chock
full of both cynicism and hope. You obviously
believe in true love, but you're also
constantly aware of practicality and societal
expectations. That's not always fun, but at
least it's realistic. Try not to let the Nazis
get you down too much.


What Romance Movie Best Represents Your Love Life?
brought to you by Quizilla

Hmmmm. Time to hide from the Nazis, then.

Not all creatives are weird.

The same way that not all weirdos are creative.

Those types...they gimme the creeps.

Interested in finding out what the Year of the Cock holds in store, I decided to look it up on the net.

I typed in YEAR OF THE COCK.

I knew I should have typed YEAR OF THE ROOSTER instead.
# posted by vince : 1:25 PM  0 comments

And I miss it about as much as I miss whatever I flushed down the toilet this morning.

For me (and I think for some of you as well), '04 had been a year that contained different kinds of deaths in various aspects of life. Be it on a global (well...regional), typhoon-battered, tsunami-drowned scale. Or on more personal levels.

It was like some prince found the sleeping fairy tale princess, woke her up with a kiss (and then some), and stripped away the...gloom-spell death shroud that hung over the kingdom. A kingdom where I seem to have been a subject of.

The first day of the new year, I was suddenly drawing again. And drawing for the pure pleasure of it. Then, it was an evening out for some beer in an almost deserted Ortigas - a pleasant and most welcome contrast to the madness of the holiday rush.

For this entry, I'll leave you with something a friend sent me last January 1. I think it's pretty much in the spirit of this blog:

To kinder gods and fiercer loves.
To brief jealousies and even shorter griefs.
To wine.
To tea.
To sunsets and coffee.
To family, friends and country.