So I exclaimed when I got a mouthful of Jack n' Jill Potato Chips. Don't worry, I was with friends at the time so I haven't started talking to myself. Yet.

I'm usually a Chippy guy. Which is why when I do have Potato Chips on those rare occassions, the salt on my lips and the distinctive flavor on my tongue instantly gives me a flashback. I am taken back to those years when I'd be in my elementary school uniform (t-shirt with the school logo, dark blue shorts and any pair of shoes - a perk of being in a double curriculum institution) and my apple-cut hairstyle, having my baon of Potato Chips along with a tertra pack of orange juice during everyone's (yes, even the nerds for they used this time to study some more) favorite subject.

Idly surveying the sun-drenched campus that would be my world for more than a decade.

Looking back on that time of great innocence and of near-epic simplicity, I realize that I have come to know a fundamental truth at an early age: I didn't like orange juice with my Potato Chips.

Dozed off while reading in bed and I had this dream (it was nightmarish for a time because I had to wear a necktie in a scene *shudders*) that seemed to take up the whole night.

Though I don't have enough psych units under my belt, I have watched enough shrink sessions in the Sopranos to hazard an interpretation.

I think it was mostly about different kinds of relationships in my life. The thread that connected this epic length dream was a young lady that was with me for practically the entire stretch. And everyone, including me, in the dream thought she was rather familiar...but no one could remember why.

While there may not have been any scenes where I was running around, unable to get away from whatever horrible thing chasing me (now that's a nightmare), the dream felt so long that I woke up tired.

While brushing my teeth, I realized that there's this slight pressure to come up with totally brilliant stuff for this Blog. Must be some survival instinct acquired as an alleged professional writer in an industry where reputations are just as good as the last project.

Well, I'll have none of that - it kills the fun.

Decided to keep whatever I post here as raw, as slaughterhouse fresh as possible.

I won't even use d spel chek.

A SELF-PORTRAIT. SORT OF. 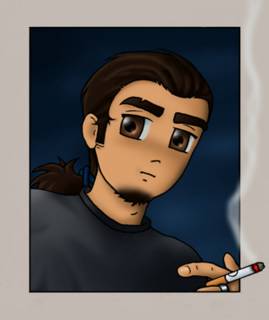 A self-portrait. Sort of.

Bought a big box of tea - well, tea bags - sometime round the week my resignation kicked in.

I had acquired the habit of having tea (blame the last few droplets of English blood in my veins...the ones that didn't dribble out during those nasty nosebleeds when I was a kid) on an almost daily basis. Usually on those evenings when I wasn't having beer. Figured getting the big box was a great idea, since I wasn't sure when I'd be able to afford this particular luxury next. And I was hoping that having a hundred tea bags would be enough to carry me through up until I get a new job and a new box.

With most of the tea bags gone. And with me still very much a bum.

Though I'd like to pretend that I'm running out of tea way faster than I expected because I was simply drinking less beer.

The big box is now a cardboard hourglass by which I can gauge the length of my unemployment. It measures the time not with sand grains but with tea bags. Never filling back up. Just draining away as days, weeks and months fly past.

Which is why, at this moment, I'm having a mug of coffee.

Just before the CRACK! when the train is released down the rails, when gut and breath are both left behind. Way behind.

They say that people ride roller coasters to feel great. The same way people who scream their heads off and spill the drinks and the popcorn while watching horror flicks feel great.

Maybe it's all about facing the fear that makes things like theme park rides, flicks and baring one's very soul out to whoever might come across this url on the internet feel great.

Surviving the fear is cathartic. Therapeautic.

Or maybe, it's all just about the thrill, the pleasure of the ride. Simple as that.

Either way, this blog is up whether I'm ready or n--