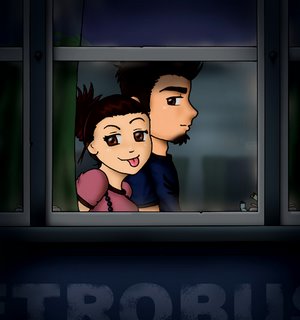 A little gift for teh Kitteh. Clicky-clicky.

Though February has 28 days most of the time, it lasts longer than April.
April disappears faster than a plastic cup of water spilled on a shimmering black asphalt road around three o'clock on a cloudless afternoon.
Unlike March, April never gets to hear the final gasps of a dying schoolyear. April is the zenith of the summer vacation. It is the unused alarm clock, the school shoes gathering dust in a corner, the long afternoon naps, the idle wait for anything worth watching on tv, the family vacation. It is hanging out with the pals, digging up the porn from underneath the bed (well...digging it up more often), the late night phone calls, the group trip.
But then, all too soon, it's May -- the month that has the stale classroom breath of June down its neck.
April is the long wait for Holy Week vacation. Holy Week itself. And the days following Easter that are spent wondering where the holiday had gone.
April is a triple scoop ice cream cone that's starting to drool. April is a two-hour roadtrip. April is the last night on the beach. April is a mind-blowing orgasm.
April is a lauriat dinner where the almond jelly is brought in when the peking duck course is not quite through.
# posted by vince : 5:40 PM  2 comments

HAVE A KNIFE DAY

Still half-asleep, I dried the knife I had just washed before slicing some ham for breakfast. I remember thinking that nothing could jumpstart a Monday morning like some ham and toast.
Yeah.
Ham. Toast. A nice mug of coffee.
Then, the stainless steel knife blade flew out the wooden handle.
Obeying the Law of Gravity (as well as the Law of Murphy), the blade plummeted sharp tip down towards the general direction of my sandaled left foot.
I had a second to either move my foot away, or think that someone must have broken the knife and then simply stuck the blade back into the handle hoping no one wil notice.
Being early on a Monday morning, I did the later and not the former.
The blade's tip, contrary to a huge number of odds, landed on my toenail (on the toe right next to the big one). And then, thanks to all the extra Tiger luck I could use up for the morning, or tough nails, the blade bounced off.
No puncture. No blood. No chipped nail. Just a slight soreness.
I got another knife and made breakfast as planned. Though I was wide awake by then, I still had my mug of coffee for the look of things.
* * *
For the next few hours after this incident, the song in my head was Mack The Knife.
# posted by vince : 10:08 AM  3 comments 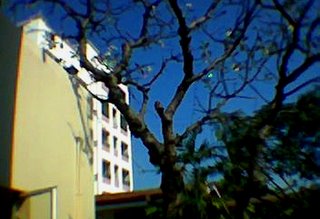 Unfortunately, it's not the clear blue sky over Mindoro or Batangas.

It's simply the view outside my room at the second floor.

And while I may have nice summer skies to watch, the sights come with scorching summer weather -- but not the sparkling, gloriously cool bodies of water that make putting up with this sort of scorchy, summery weather worth it.

There isn't a beach for miles. And if there are any swimming pools in the area (if -- I've lived here all my life and I'm pretty sure there aren't any), the pool-owning neighbors aren't sharing (or even talking for that matter).

The only time there'd be a decent amount of water beneath this cloudless view is when my dog Bud is being hosed down. The weather's too hot for a big dog with a black coat.

It's too hot for the dog's owner.

I promised myself I'd save up for an airconditioner. I just hope I can scrape together enough pesos before I fry (or, more likely, sweat) to death.

During a supermarket trip with Eclectic Curiosity*, we saw this Turkish treat that sold at P20.60: 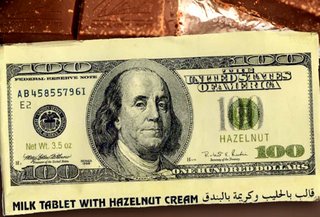 My reaction was somewhere between wow. And why.

I suppose it's meant to refute the saying that money can't be eaten.

Well. For something about the size of an average chocolate bar yet worth just a little over 20 pesos, it actually tastes okay. Heh.
* She did the art featuring the wrapper. Thanks, Kitty! ^_^
# posted by vince : 9:25 AM  2 comments

Two processions reenacting Christ's trip to Calvary met on our street last Good Friday. Group A was marching from the Eastern end of the street. Group B had just arrived at the western end from the main road. Both groups were made up mostly of teens dressed in various Biblical wear (wigs, robes, veils, plastic Roman helmets and so forth), visibly sweaty in the noon sun even from the second floor balcony where I was perched. Both groups were, of course, bristling with the usual wooden spears, short swords, shields and leather whips.
Group B moved to a side of the street so Group A could march on. But when the Group A Christ passed (complete with thick, curly wig and heavy wooden cross), he was pounced on and flogged by (a-haha) strapping lads from Group B.
Perhaps it was all just a product of way too much zeal. Or perhaps it's something that happens when kids are handed whips during Holy Week: a Pavlovian reaction of sorts to scourge anyone they see with a cross.
Then again, maybe it was just way too much marching under the sun.
'Romans' in yellow capes and shiny gold breastplates had words (and a reprimanding whip) with 'Romans' in red capes and black, leather breastplates. And, after making sure their Christ was okay and available for whipping by his own team, Group A moved on.
# posted by vince : 9:21 AM  4 comments

While applying gobs of Lily's Peanut Butter on my Gardenia this morning, I realized what the song in my head was.
The overture from the soundtrack of Jesus of Nazareth.
So, Maurice Jarre. You win again.
Hmmm.
I suppose I'd be hearing songs from Jesus Christ Superstar next.
# posted by vince : 9:15 AM  2 comments