Recently, I had a little discussion with some friends how Tinola appears on no less than the Noli Me Tangere.

I suppose anyone who reached 3rd year high school in the Philippines would remember the dinner at the beginning of the novel. When Padre Damaso takes offense at being served the chicken neck and wing while Crisostomo Ibarra gets the atay and balun-balunan.

Now, this soup served in banquets during the Spanish colonial era shall be mentioned in my blog as well.

Because during dinner, I managed to spill hot Tinola on my lap.

Never was fond of Sundays. There are Sundays that are almost in the league of those classic Mondays...in a boring sort of way. Even for the more common Sundays like this one, I actually get something like a dull depression around the late afternoons and early evenings.

Normally fun activities - such as going out to the coffee shop to meet some friends - end up feeling oddly like a chore.

Maybe I'm simply not used to having Sunday activities. Unlike some (or is it most?) families, my relatives never had those regular Sunday brunches or barbecues that lasted until dinner. Or maybe they actually do: it's just that I never went.

Is Sunday depressing because it's a universal (more or less) day of rest? Or has Sunday simply been appointed day of rest since it was depressing anyway?

Had the flu most of this week. Couldn't read or watch anything. Whenever I tried, the world swirled.

I was forced to stay in bed with nothing to do but stare at the ceiling (fortunately I had cleaned it recently) and listen to the rain...which by itself isn't really bad. If only it had been by choice and not by circumstance. And if only I didn't have to do it for days.

When I finally got better, I watched the Korean animated feature Wonderful Days for the second time.

I wanted to make up for the sensory deprivation I've recently gone through. And Wonderful Days had been the first on my mind precisely because of its stunning visuals and haunting musical scoring.

I think it worked. 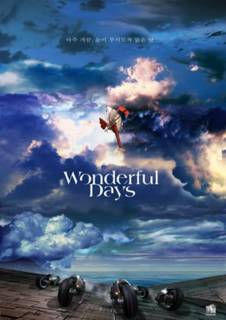 A nice young couple, high school kids perhaps (or petite college students), stood beside me this afternoon. Like me, they were on the curb, waiting to cross from Greenbelt to Greenbelt. It had just rained and the pedestrian walk had puddles in some places, and what can be considered streams in others.

As a car carelessly sped past, one of its tires rolled over a puddle in front of the couple.

The boy hopped before girl to keep her from being splashed by filthy water.

It may all seem a bit Elizabethean.

But that little gesture is simply the sweetest, most gentlemanly act I've witnessed in ages.

Had to take a cab just now. And though I had a valid enough reason for doing so (not feeling too great), I felt a bit guilty: bums have no right to be in taxis. I could have used whatever I spent for something more important and all that.

Then again, I can just pretend I bought three packs of cigarettes and smoked them all at once.

In his book Everything's Eventual, Stephen King mentions that every writer in his lot should have "at least one story about that Ghostly Room In The Inn" aside from a premature burial tale. Well, for us bloggers, I suppose we should have at least one entry about our fear/s as well as some sort of list.

MY IDEA OF COMFORT FOOD (in no particular order)

And, though some of you might complain (yeah yeah) that it's a beverage, this item deserves special mention: Beer (besides, it is made from barley anyway, right?)

Was in Cubao around lunch (er...long story) and decided that since I was in the area anyway, I might as well drop by the big National Bookstore branch.

While I was walking between shelves at the previously owned books section (well, it's actually an entire musty, lonely floor)and scanning through titles, the store's sound system suddenly plays (nah, not I'll Be...that was when I passed a shop for denim pants in Farmers) of all things, the theme from Voltes V.

I wasn't sure whether to smile or cringe at the strangeness of it all.

So, I just kept walking as an anthem from my childhood played for books that were no longer wanted by their original owners.

The Edwin McCain song I'll Be never fails to overwhelm me. All it takes are the first few chords and the world just...stops.

If it doesn't have that profound an effect on you - don't worry. It's just that the song has taken on a special significance (need I explain, people?) for me. I'll Be evokes an emotional association and a subsequent (Pavlovian?) reaction that is straight out of Experimental Psych 101.

Everytime I hear that song, I'm a wild animal frozen on the middle of a country road. Glazed-over eyes staring at the fast-approaching headlights.

Happened last night as I was out drinking with friends. And (a-haha) it's happening right now since I'll Be started playing on the neighbor's radio (coincidences are comforting in a way - they assure me that the universe has a well-developed sense of humor) while I was writing the previous paragraph.

One of my teachers began a lesson with this story about a vampire. Maybe you've heard this before.

A vampire bit someone and made that victim a vampire as well. Then the two of em bit a person each, and so there were now four vampires. Then these four vampires again bit a person each...and so on, and so forth until the vampiric hordes exceeded the human population of earth (and man, would this planet suck!).

Now while I had seen through her little scheme and realized all this was simply meant to make multiplication interesting for us (it obviously didn't work on me), I did remember the story.

And I sure am thinking about it now - because my friend William now has his fledgeling blog right here! Woo-hoo!

Used to be considered just a bad influence. Now, it seems that I'm a blog influence as well.

Somewhere in The Internet.

VINCE. 'Tis Shakespeare I've been reading all these past few days,
His tragedies and comedies, his sonnets and his plays,
For pleasure's sake and not for sake of any teacher's class.
By Phoebus! William's Henry the Fifth seriously boots ass!

That used to be unthinkable. If anyone from my batch had tried that, he would have ended up uncomfortably seated before the vice principal for discipline. Who, if I remember it right, had been my math teacher.

As a second generation Bosconian who had spent 11 years in this(former, if my info's correct) exclusive school for young gentlemen, I say: why on earth didn't they do it earlier?

Now I'm really not sure if that would have affected my life in a good or bad way. But I suppose things could have been a lot more... um ...interesting. Back then, the maroon bass guitar (which I miss!) had been my best incentive for going to school.

Well, at least this generation of Bosconians might have a better chance at having a prom. We never did. So I never got to find out if I'd manage to put a corsage on right. Or if I'd end up sticking my poor date's boob with the pin.

Guess I should apologize in advance.

Never thought of myself as a poet. It's just that...early this morning, maybe around three or four, I woke up with silvery moonglow on my face, and this poem in my mind:

Riding the MRT is just like going to church.

In both, you can find the same cocktail mix of perfume and cologne, the humid atmosphere created by packing sweaty people into a cramped space. Both basically contain people who are trying to get somewhere.